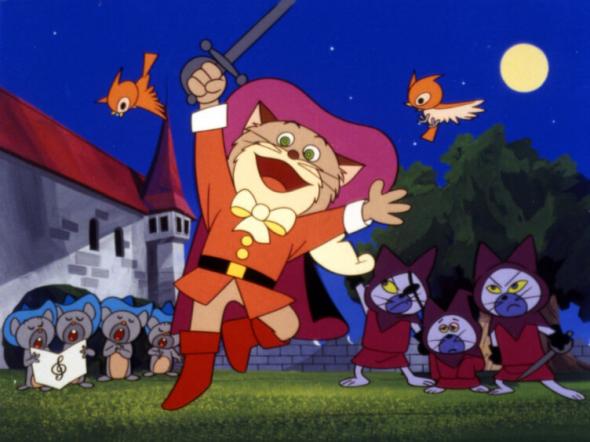 This is a tale that happened a long time ago. Pero is a very clever and brave cat. One day he saves some mice and is driven out of the cats world. On a rainy day he takes shelter under the saves of a farmer's house where he becomes acquainted with a boy named Pierre. Pierre is the youngest of three brothers. After their father's death Pierre is driven out of the house by his gready brothers who are reluctant to divide the family fortune with him. Pero cheers up Pierre and they start on a journey together. They cross over fields and mountains across lakes and rivers and they at last arrive in a castle town where the king is searching for a husband for his princess. At a first glance Pierre is amoured with the princess. Pero makes up his mind to help Pierre and he plots various plans to enable Pierre to marry the princess. Many princes and knights come to the castle from various countries of the world. Suddenly a storm breaks out and the Devil King appears. The Devil King tries to curry favor with the princess by changing the castle into gold and changing the rooms of the palace into diamonds, but the princess is terrified by him. At this, the Devil King becomes angry and changes the castle into ruins and the King into a pig. He then flies away leaving word that he is coming back to take the princess away in three days on the night of the full moon.