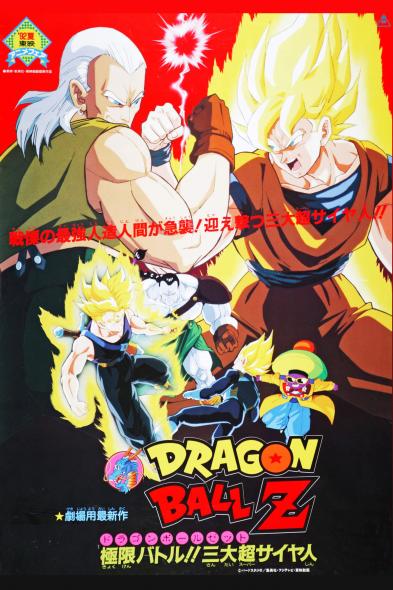 ordinary people getting by-blows, Goku becomes furious. Thus the battles start. Goku vs. #13, and Trunks vs. #14/#15.The battles are so hard that Gohan cannot get involved though he comes there to help his father. The power of androids almost overwhelms the super warriors. At the very critical moment, Vegeta arrives and save Goku. The battles are now Goku vs. #13, Trunks vs. #14, Vegeta vs. #15.During the hard battles, Goku, Vegeta and Trunks transform into Super Saiyan, at last. At the same time, Piccolo arrives and joins the battle. With Piccolo's help, Trunks and Vegeta defeat #14 and #15. Now, there is only #13 left. But, suddenly #13 absorbs the computer tips and power pile of #14 and #15, and transforms to Fusion #13. Vegeta and the others attack Fusion #13, but their attack doesn't work against him. Goku also fails the battle and return to his normal figure. Goku starts collecting energy to make the Spirit Bomb, considering it as the last chance to win the battle. In order to give him the time, Vegeta, Gohan, Trunks and Piccolo challenge against Fusion #13, but are defeated one after another.At last, the Spirit Bomb is completed, and at the same time Goku transforms into a Super Saiyan again. Because of the evil mind destined for Super Saiyan, Goku cannot use the Spirit Bomb which is available only for the innocents. But, Super Saiyan Goku absorbs the energy of Spirit Bomb, and gets his power up. Now, with the extra super power, Goku attack Fusion #13, and defeats it at last.