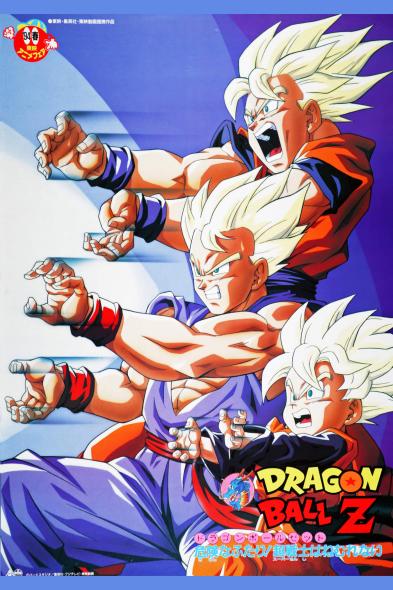 Broly, who had been blown out by Goku with a comet many years ago, survived and now is sleeping in the ice deep under the ground.Little Goten and his friends are looking for Dragon Balls to make their wish come true. They come to Natade Village where a Dragon Ball supposed to be. But there, they hear that the villagers have to offer a sacrifice to a monster in order to save the village from the abnormal weather. They decide to defeat the monster for villagers. While they are waiting for the monster come out, they make quarrel over the food, and Goten starts wailing, that makes Broly wake up.The monster appears in front of them was a huge dinosaurs. Goten and Trunks knock it out. Now being satisfied with the success, they spend a peaceful night.The next morning, Broly suddenly appears in front of Viedel and comes attacking her. But looking at Goten, he calls out "Kakarot!" and gets his power up. He now comes attacking Goten, taking him for Goku. Goten and his friends fight against him, but feel fear of his extreme power. Just at that moment, they find the last Dragon Ball with four stars. They try to call out Shenron, the holy dragon, to destroy Broly. But Trunks gets caught by Broly, and cannot do it.On the other hand, Gohan feels the presence of extreme power, and came to the battle place chasing the sign of such power. There, he finds his brother Goten and Trunks in danger and save them out. Now the fierce battle starts between Broly and Gohan. But it is obvious that Gohan's power is inferior to Broly's. So, with his last power, he tries to push off Broly into the volcanic crater. He gets succeeded. But with his power used out, Gohan also goes falling down into the crater, when Krillin has just arrived and saves him out.However, Broly survives. He comes back out of lava, transforming into Legendary Super Saiyan. Gohan is seized by Broly. But he scarcely escapes helped by Viedel. The attack of Broly continues. Gohan and Goten make the Spiritual Bombs and shoot them together at Broly. But it doesn't give any damage to Broly. They feel fear that they might be defeated.Suddenly, Goku, who must have passed away to the other world, appears in front of the Gohan and Goten. Encouraged by Goku, the brothers get power up again. Now, the father and his sons together shoot the Spiritual Bombs, and it brow out Broly at last.The peaceful days came back. But was it real Goku who helped the brothers? Or, just a vision created by the strong wish of the brothers?