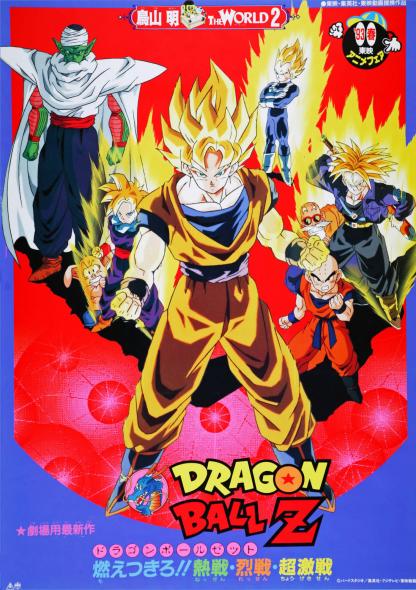 Super Saiyan, although he was again calmed down by Paragus. While watching his transformation, Goku guesses he is the Legendary Super Saiyan. It was proven next morning, when Paragus's evil intention uncovered. Broly, at last, transforms into the Legendary Super Saiyan. His power gets too huge and even Paragus cannot control him anymore.Goku, Gohan and Trunks transform into Super Saiyan, and fight against Broly. But Broly's power supercedes their power. They are defeated one after another. There, Piccolo arrives and gives them Senzu Beans. With their power recovered taking Senzu Beans, they, with Piccolo now, re-challenge Broly. And yet, Broly is too strong, and they are defeated. Vegeta also joins the battle, but his Energy Bomb makes no effect on Broly. On the contrary, he is also defeated.In the meanwhile, Gumory Comet comes approaching to the New Planet Vegeta. Paragus is aware that it will soon crush at the planet. Broly is defeating the strongest Saiyans whom Paragus considers to be only the thread for his evil ambition. So, he tries to escape from the planet, leaving Broly, his son, fighting there alone. But watching a vehicle flying away, Broly, now unconscious because of rage, crushes it.Goku and the others have to make the last challenge. All of them give Goku all of their power. Goku makes a huge power, getting individual power together. And shoot it against Broly. It brows out Broly and Gumory Comet as well. Thus, all the people were saved.