CAPTAIN HARLOCK The Secret of the the Arcadia 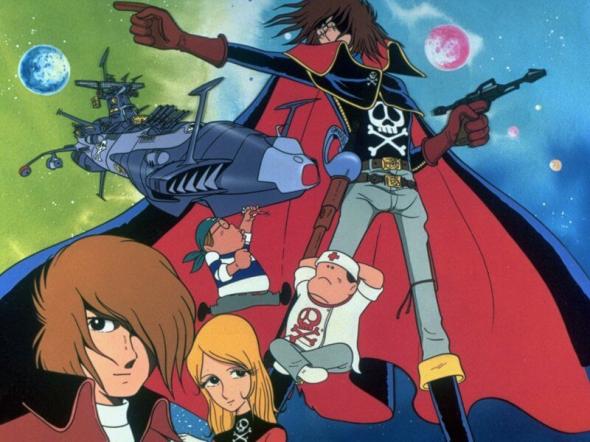 Captain Harlock has become a prisoner after the planet Earth was totally destroyed by the "Illmidus" space invader and is taken to their Earth Occupation Force Headquarters where Commander Zeda orders him deported as a dangerous and undesirable character.Harlock is then arrested with a mysterious Japanese named Tochiro after having a fight with some Illmidus military officers and both Harlock and Tochiro are found to be carrying Harlock family documents. This causes them to be put under the Memory Molecular Analyzing Scanner. Images of past Harlock history show that former Phantom F. Harlock, Jr. met Tochiro’s father during World War II. Harlock, Jr. the disappeared after giving the elder Tochiro the Harlock family history.Harlock family history.Harlock and Tochiro both realize that they are tied together by a strange twist of fate.The beautiful, young, free space trader, Emeraldus lands on the planet Earth after making her way through the Fire River of Prominence and Tochiro helps her repair her space ship.Now, the Illmidus invaders want to send the Earth Volunteer Army to the planet Tocarga and destroy it in order to extend their power in space.Zoll, La Mime, and 50 aged Tocarga soldiers who are on Earth Attempt to steal Emeraldus’ space ship so that they can go to their planet of Tocarga and die with their families – but Tochiro insists on their using a new space ship that he had been building.Captain Harlock boards this new space ship, Arcadia, wearing a jump-suit with his skull insignia and a patch over his right eye which was injured when he attempted to rescue Marya, the only woman Harlock has ever loved.Commander Zeda of the Illmidus invaders is so incensed by Captain Harlock’s counterattack on Tocarga, that he orders the execution of both Zoll and Emeraldus who had remained on Earth. Zoll is killed and Emeraldus seriously wounded.When Captain Harlock arrives on Tocarga with his small band of Tocarga soldiers, they fine that the population has died out completely while waiting for Zoll’s return.Arcadia returns safely to the planet Earth, but the real battle has just begun. Zeda, on board the spaceship Starzatt challenges the Arcadia to a duel. And now, the decisive battle takes place…