JACK AND THE WITCH 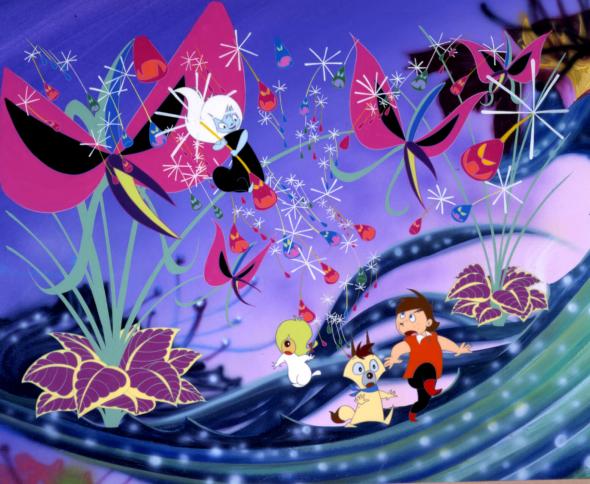 Jack, a naughty boy, meets a girl called Kiky when he goes for a drive with his animal friends –a young bear, a fox, a mouse and a puppy. She gives him and the mouse a ride in her helicopter. Then she takes them to the old castle of a witch who is making Kiky kidnap children to turn them into devils. While the mouse is sucked into the witch’s Devil Producing Machine, Jack makes a narrow escape. Kiky chases him by helicopter, but she fails in catching him. Being afraid lest the witch should punish her, she takes an airplane that night and pulls off Jack’s house from the ground. It hangs down from the flying airplane with him and the animals in it. He jumps up on the wing and fights her. The airplane plunges into a lake with the house, but all of them are unhurt except fainted Kiky. Jack attends her, but when she regains consciousness she runs away without thanking him.Jack and the animals sneak into the castle to help out the mouse. Kiky finds them and smilingly offers to take them to him. Without knowing that it is her trap they follow her except the young bear who is accidentally left behind. Then they fall into a pit at the bottom of which Devil Producing Machine awaits them. Standing at the entrance Kiky has the machine suck in Jack. But he comes out safely as the young bear and Shinbari, the animals’ friend now, stop it from working. Then Jack destroys the machine by throwing devils’ weapons in it. Angry at Kiky’s failure, the witch imprisons her in an underground iceberg. Jack frantically tries to break it to help her out. When it is broken jubilant Kiky finds his corpse floating in the glacier. She bursts into tears devils are not supposed to have. Those shed in his eyes brings him back to life. Exasperated, the witch brings about thunder, a storm and a flood to kill Jack and Kiky. In the witch’s room the animals watch anxiously the whole scene reflected on her crystal ball. They accidentally find it is the source of her magic. The moment they destroy it a big explosion occurs and she turns into an old woman with no power. She hurriedly lays a time bomb in the castle and gets away by airship. Shibari puts the bomb on the airship by throwing a lasso. When she tries to take it off by shaking the airship it clashes with the tower of the castle and explodes. Touched by flashes of the explosion Kiky changes back into a pretty girl, and Shinbari, the mouse and the other devils return to their former selves one by one. Then the sunshine returns to the sky, verdure to trees and happy laughter to the all of the animals and the children hurrying for Jack’s home on his broken-down steam car.