PUSS'N BOOTS TRAVELS AROUND THE WORLD 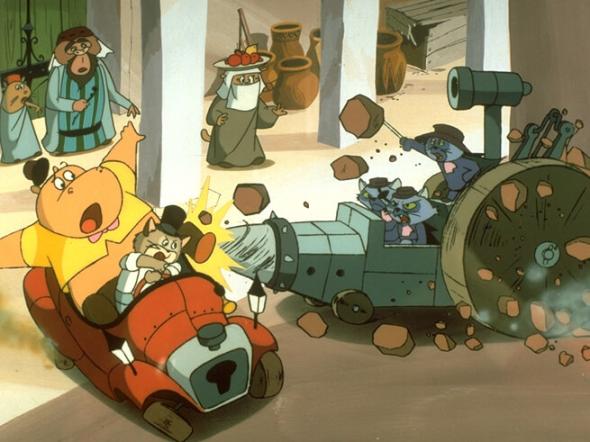 The saloon of the town of Dondon has just been in its height of confusion. Pero, the PUSS'N BOOTS, is making a bet with Gourmont, and influential man of the town, to make a tour around the world in only eighty days. "Pero, it's impossible with the late restoration of the Kuez Canal, I dare say." "It sure is! It says in the paper it would take a hundred and fifty days?" But Pero is determined, and gives his word of honor to fulfill the promise. "Ha, ha, ha … A green horn like you can't go around the world in eighty days only? … Anyway, it's interesting. I'll gibe you all my property." You've got a deal. Pero is to make a trip around the world and upon his return, stand on the top of the clock tower before the noon bell finishes its twelve strikes after eighty days. "Start!" Pero and his friends-Carter, a hippo, and two mice, a father and his son- set forth on their tour. "Stay with it." "Never listen to Gourmont!" All the people in town expect Pero to knock Gourmont, who is always throwing his weight around, down a peg. Well, Gourmont is crafty enough to send Doctor Garigari-a wolf- to make trouble for them. He tries to destroy their car, and then orders a large fishing boat to swallow their submarine. On one occasion he hires three murderers to kill them, on another sets up a mammoth to crush them…On land, on the sea and in the air, he tries every possible means to hinder them. However, every time Pero and the three find themselves in a crisis, they unite their efforts to succeed to the limits of courage and tactfulness. They strive all their way-from Dondon-going down the Thames-by way of Madridd-Vinice-Hathens, the Kuez Canal-the Continent of Garabia-Torman-silk road-Pindia-Pongkong-the Missussuppi and the North Pole… At last they are now over Dondon. Meanwhile, Gourmont gets ahead of them and is in the clock tower and removes the stairs…shuts them up in a closet…speeds up the clock…He tries every possible thing. On the other hand, Pero and his friends overcome one pinch after another, till they are on the top of the tower before the clock strikes noon. "Hurray for Pero! You've done well!" "Gourmont has lost the bet! It serves him right!" All the people in town are celebrating. They can now enjoy peace without being threatened by Gourmont.