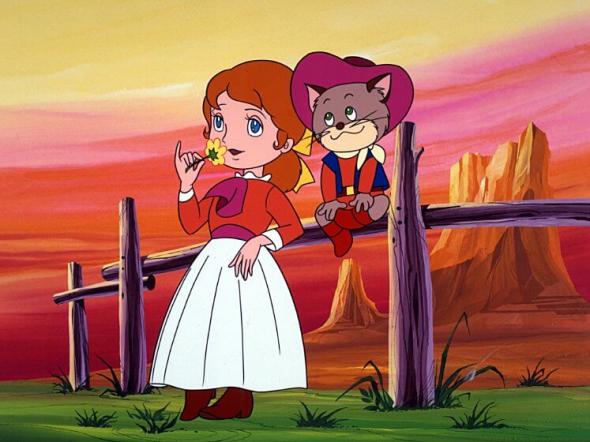 Once upon a time, near the ruins of an old castle, there lived the King of Cats. He was famous for his violent temper and now he is lashing out at his three gunmen, who had been ordered to bring back Pero, but had returned empty-handed. Pero, a former subject of the angry King, had lived in Cat Country once but he had dared to save a mouse from death. Now, as everyone knows, the mouse is the mortal enemy of all cats, so the King orders his three gunmen to go to the ends of the earth, if necessary, to find Pero. Pero is a happy-go-lucky sort of feline and very hip for a cat. Fleeing from the wrath of the King, he decides to seek his fortune in the wild and wooly west. On the way, he encounters the King's gunmen hot on his trail but he foils them and blithely goes on his way. On the stagecoach to Go Go Town, he meets Annie, a pretty girl who is returning after finishing her education in the East, and Jimmy, a boy with sleepy eyes and slow movements. They are attacked suddenly by holdups who are after the new sheriff but since he does not seem to be on the coach, they ride off. Sad news awaits Annie in town. Her father had been killed by the Big Bad Boss for finding out about the bogus money he was making to get rich fast. The Big Bad Boss also kills each new sheriff who arrives to keep law and order in town. He is determined to keep the whole place under his thumb. The Big Bad Boss tries to scare Annie into leaving town but she is her father's daughter and cannot be frightened away by threats. With the help of Pero and Jimmy, she opens a restaurant in the building her father owned. Once again, Pero happens to save a little Indian mouse caught in a trap. The little mouse's father, the Chieftain of the Indian mice, promises to help Pero and Annie. The sleepy-eyed Jimmy is really the new sheriff. They all join forces and expose the Big Boss' villainy and his secret bogus money factory. The Big Bad Boss gets his comeuppanceand all ends well.