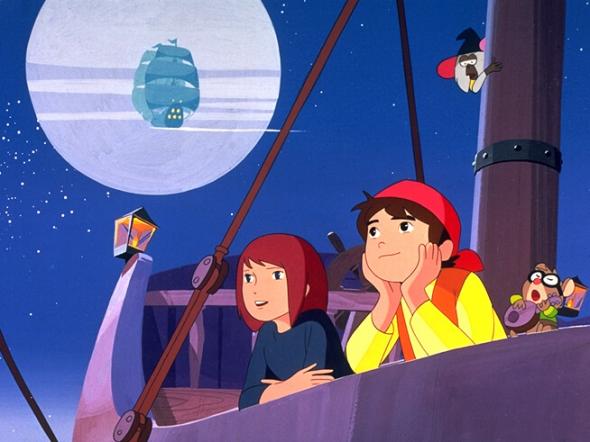 By chance Jim comes upon a map of Treasure Island. He leaves the port accompanied by Glan, the rat and Bub, the baby on a strange looking boat of his own make to look for the island. There is no choice but to trust luck since the boat is a rattletrap.Suddenly a pirate ship gets in the way. They fly a pirate flag and instantly attack Jim’s boat. Jim and the others counterattack desperately, but they lose the war and are caught.Jim and the others are taken to a skull-snapped pirate island and the map is taken away by Baron, the wolf. In jail Jim happens to learn about Kathy, the granddaughter of Capt. Flint who met the same fate and had died on the island. Kathy’s pendant, hidden in her boot, is the key to open the treasure box. Kathy is also looking of the treasure.Jim and Kathy break out of jail and succeed to get back the map from the Baron, whereupon the pirates are obliged to take up with Jim and the others for a voyage in search of the treasure.The pirate ship "Pork Saute" runs into "Gratin", the great pirate ship. A severe sea battle ensues, but "Pork Saute" wins when the enemy ship’s powder room is blown up by Jim."Pork Saute" is overtaken by a heavy storm and is broken in half, but the following day they drift ashore to the Treasure Island where butterflies are fluttering about and flowers are blooming all over. Capt. Silver seeks to kill Jim knowing he is no longer needed.They arrive at a cave near a lake surrounded by mountains. Capt. Silver pulls the door chain in haste. The lake water gushes out and carries Silver away towards the sea.The treasure box is found and opened. The treasure shines brilliantly in the face of Jim and Kathy who stare in amazement.