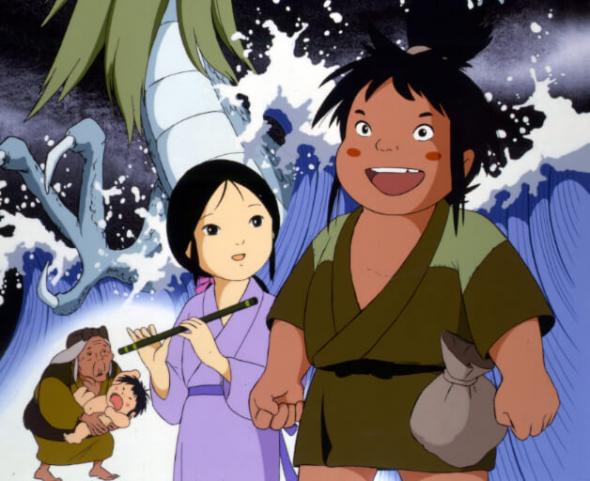 Taro, the Dragon boy is living with his grandmother in a tiny village in the mountains. A long-nosed genie appears when he is playing with the animals and challenges him to a fight. It is a close contest. The genie begins to like Taro and grants him the strength of a hundred men.His mother turned in into a dragon as she ate the forbidden fish out of hunger when she was pregnant with the boy and has been missing ever since she gave birth to him. Taro sets out to locate his mother as he learns the truth from his grandmother.Taro arrives at Mt. Iron where he happens to find his chum, Aya who was kidnapped by the "Black Demon," the mountain deweller. He beats the demon and saves Aya. The villagers give him feast because the pestilent was gotten rid of. Taro continues his travel after giving Aya a pony who is able to run 200 miles a day.Taro runs into a snowstorm in a mountain. A snow fairly appears and torments him until he falls unconscious in the snow when Aya comes flying on that pony. He is rescued. Riding the pony, the two go flying towards Lake North where Taro’s mother is to be found. Finally they find their way to the lake. Taro calls his mother at the top of his voice, and Aya desperately plays the flute.The dragon mother appears and tell the children why she was turned into that ugly shape. Taro now realizes how poor the people in his native village are, and takes it into his head to try to make fertile land for them.The huge dragon hurles herself ant the craggy mountain over and over again with Taro on her back, bathed in blood. Lo! The mountain breaks and the lake water finds its way to create a vast fertile land. The dragon is restored to the former state of Taro’s mother because of the boy’s sympathetic tears shed on her. The mountain villagers including the mother and the son and Aya live happily thereafter.