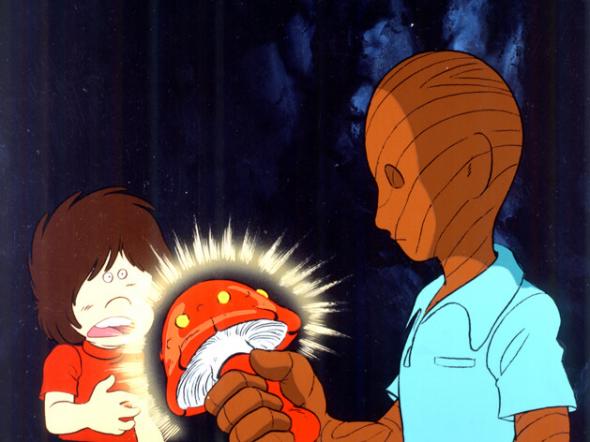 In AD 2XXX, people on earth are lengthening their lives by mechanizing their bodies. However, a lot of money has to be spent to buy mechanical bodies. Tetsuro and his mother were living alone together.They were flesh and blood because of poverty. One night, the mother is shot to death by a ruthless man-hunting mechanical man. She tells Tetsuro about the existence of a planet where anyone can become an immortal man before they die.By this time, the space railway network has covered the greater part of space, and the ultramodern space trains are running between the earth and the other planets every day.One day, Tetsuro comes across Maeter, a mysterious beauty: She gives him a season ticket without limits for the Galaxy Railroad. Galaxy Express 999 is said to make a stop at the planet where anyone is able to become an immortal mechanical man.Galaxy Express 999 bearing Tetsuro and Maeter pulls out or the station on earth heading for the "Planet of Dreams and Hopes" that must exist somewhere.It runs from planet to planet in boundless space.Tetsuro observes various ways of life in the space train and at the stations or planet of all sorts along the way. Soon, he begins to talk to himself. "Is it really happy for a man to become an immortal mechanical man?