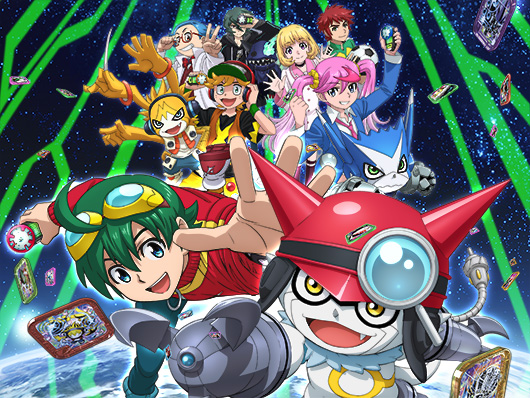 These days, everyone around the world is using smartphone apps. Within these lurk undiscovered beings called App Monsters--aka Appmons.
Appmons are app-lifeforms equipped with artificial intelligence that can think and act for themselves. Located in the interval between the human world and the digital space, they've been functioning on behalf of systems and humans.
But Leviathan, the villainous final boss AI lurking in the online sea, was manipulating the Appmons with a virus and starting to hack into each system in an attempt to control the human world from the Internet.
As if guided by some great will, the young main character Haru Shinkai obtains an App Drive, and makes the Search App Monster Gatchmon materialize from an Appmon Chip.
What is the mystery hidden within the App Drive? What about the mysterious field where the Appmons lurk between the online world and the real world? What's App Fusion, in which two Appmons evolve? And what in the world is Leviathan's true goal...!?
The odd couple of Haru, a boy who loves to read, and Gatchmon, the Search App Monster, run all around the Internet and the real world.