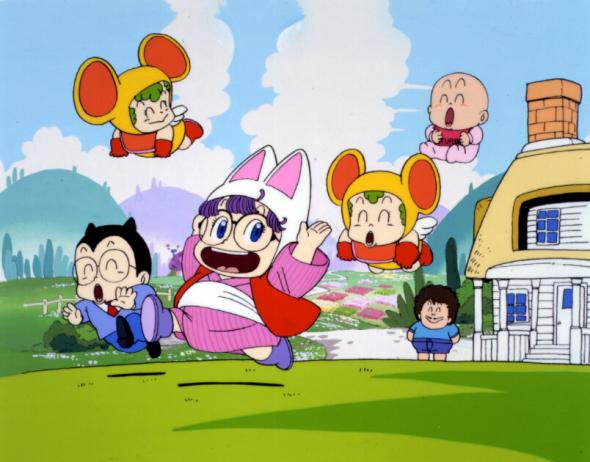 The place is an imaginary village called Penguin Village. It may exist above the clouds or just beyond the door of your room. It is a village like a paper balloon floating in your mind. Mr. Senbei Norimaki lives in this village. He is called Dr. Slump, a born-inventor. One day, he succeeds in inventing a complete human-type robot, Android. This is Arale. The word robot, makes one think that it is mechanically strong enough to protect human beings and to fight wickedness. But Arale is not super robot. Arale can neither fly in the air nor fire missiles from her belly. A glimpse of Arale gives the image of an ordinary girl. She is a playful, sweet girl robot wearing glasses. To Dr. Slump's surprise, Arale has been destined to wear glasses, which is somewhat sad and funny for a robot. Dr. Slump takes Arale to a coffee house called the Coffee Pot, which is a place of relaxation for the local villagers, and introduces her to the villagers as his 13-year-old younger sister. This is her first appearance in the human world. She goes to Penguin Village Junior High School. Her classroom teacher is Miss Yamabuki, a beautiful teacher. Dr. Slump falls in love with her at first sight. Through her school life, Arale amazes her classmates by demonstrating her mathematical ability like computer mind and excellent athletic ability. Gradually she becomes friends with her classmates who also have unique personalities.