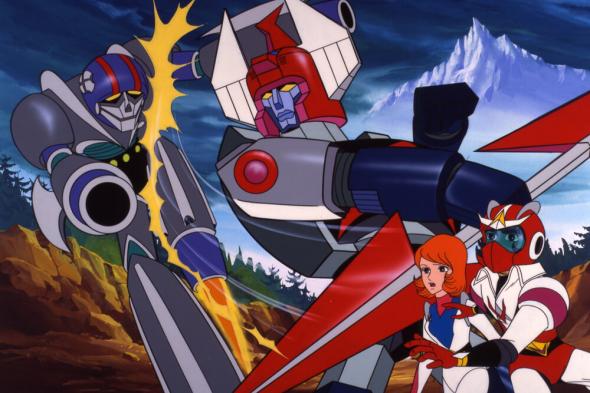 out at Tobishima Island under the direction of Dr. Oedo. Takuma Ichimonji, who has been brought up by Dr. Oedo, is working on the project, too Takuma's father, Dantetsu Ichimonji, was once considered the world's best astronaut. However he got involved in a mysterious, scandalous incident, and disappeared with a space rocket ten years ago. Takuma works very hard day and night to make the Promete Project a success and, thus, redeem his father's honor.General Toppler, who aims to control the "Planet of Hope" completely, has destroyed Promete projects in various countries, and is now launching an attack on the Japanese planning base. Takuma fights bravely against the fierce attacks from the Toppler Force; yet despite his valiant efforts, he falls into danger… All of a sudden a black jet shows up in the midst of the fighting to rescue Takuma. The pilot of the mysterious jet is masked Japanese. Dr. Oedo is impressed with the masked man's flight techniques. And the Doctor, who has by this time lost his memory, calls him "Captain Dan", and appoints him to be an instructor for the pilot cadets, including Takuma, of the Danguard Ace.The training is extremely strenuous and severe. Takuma sometimes wonders if the rough program has any connection with his long lost father. He highly respects Captain Dan's flight techniques as demonstrated when he easily quelled the various sudden attacks made by the Toppler Force during the training period. Takuma eventually manages to hold up well against the harsh training.In due course, the Satellizer is completed. But suddenly Captain Dan is struck with a strange illness. At the same time, begin fierce attacks from the Toppler Force. Ignoring objections from Dr. Oedo, Takuma gets into the Satellizer, and takes off by himself.