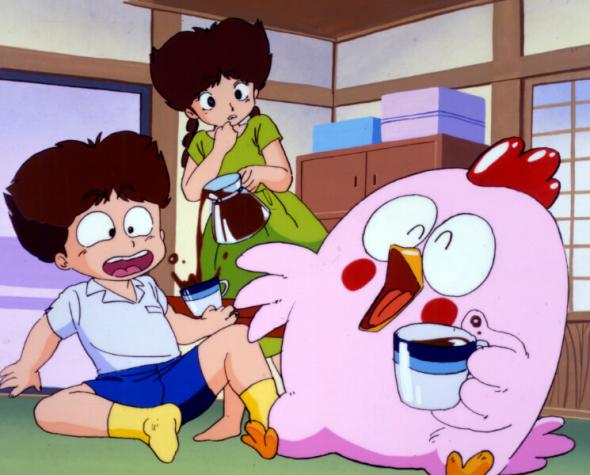 A comedy centered around a strange bird-like, yet very hefty and incredibly gluttonous creature 'Ganmo'.One Morning a girl named Tsukune Tsukuda, out of spite, let her brother's pet bird go. But later she has misgivings, and comes home with an egg she has found to gibe to her brother, Hapeita.Hanpeita isn't all too pleased with the big, odd-looking egg. However, in the meantime it swells up, breaks its shell, and out comes a strange bird-like creature. This is the birth of Ganmo'. It speaks like a human being, and comes to live with the Tsukudas.Not wanting to be a mere freeloader, Ganmo takes the initiative to run errands, clean the house, etc…yet he blunders at everything he does. Ganmo the tries to clear his reputation, but his efforts only ends causing more and more confusion.One day a charming girl comes moving in the house next to the Tsukudas. Her pet is a stange mina, named Deja-vu. It is foppish but has a poisonous tongue. And it always teases Ganmo because of its odd-looking.Thus, the world around Ganmo gets into a mess more and more.