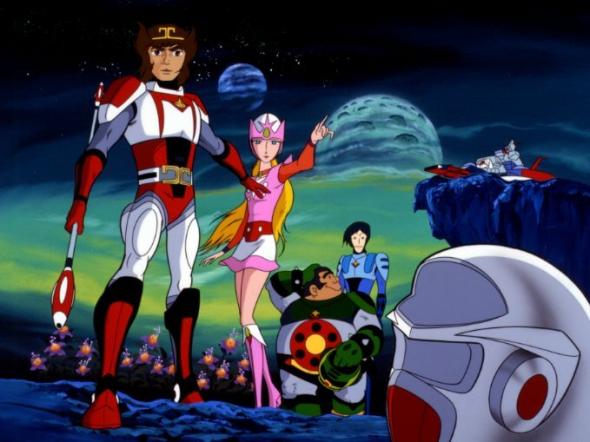 Aurora was the princess of the moon, But her mother land was attacked by monstrous starmen, She escaped and was saved by Dr. Kitty.Aurora is a beautiful, gentle girl, but as a matter of fact, she is the survivor of the Galaxy. Because, she was born with the marvelous ability to recover the Great Planet which is gradually growing weak. All the devastation of Galaxy is caused by this weakening of the Great Planet. Dr. Kitty knows the ability of Aurora and asks her to go there saying that if Aurora goes to the Great Planet, peace is sure to return to the Galaxy. So, Aurora decided to go and set on her journey in the space by the space ship "Queen Cosmos".On her way to the Great Planet, Aurora meets three wild cyborgs, Coogo, Hakka and Georgo. They are attracted by her beauty and genuineness, and become her knights, Now Princess Aurora attended by the three knights continues her journey. But the monstrous starmen are waiting for them to obstruct their way.For, they fear that they would be restored to minerals or plants, when the Great Planet recovered energy.Protecting Aurora, the three knights fight against the monstrous starmen. But they are not permitted to kill them who were originally peaceful creature in the universe. That's because Aurora is expecting that they will be restored to their former selves when her journey gets succeeded.Aurora and the three knights continue their hard way to the Great Planet.