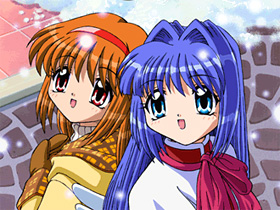 Yuichi Aizawa is in the second year of the senior high school. He has to move up the north where he had lived when he was a kid. He has got used to move and to change school because of his father's job but this time he feels something different toward the place. He frequented there almost every year though he's drop from any single memory of the time he spent there.In such place, he starts new life with the Misuses where his aunt and cousin live. His cousin, Nayuki is the same age as Yuichi. They meet again in seven years and new life stars there.Yuichi will get to know many girls in the new place.Yuichi encounters every single girl, to spend time together, sometime has a little quarrel with them, and sometime misunderstands each other. In small step, Yuichi and these girls will have better communion of heart with heart. At the same time, Yuichi's sealed; frustrating, distant childhood memories will be recovered slowly.